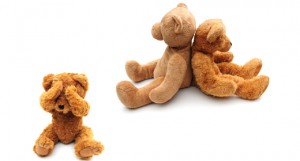 For adults engaged in difficult divorce and custody battles in Bucks County, it can be all too easy to forget the significant, long-lasting impact that these types of proceedings can have on those most sensitive to the fallout, children. Unfortunately, the setup of the court system promotes a competitive approach to determining custody in that one party is the so-called winner (the “primary” custodian) and one party is the so-called loser (the “partial” custodian) in most cases. Children, however, do not see it this way. For children, their parents’ divorce and/or separation is a confusing and overwhelming event, and they look to their parents for guidance on how to handle what is occurring.

The Well-Being of Children in Bucks Co. Custody Cases – Factors to Consider

Below are some things to consider for the well-being of the children.

1. Children Do Not Care Who Is Primary.

Children love both of their parents, regardless of where they spend most of their overnights. As long as both parents put forth the effort to be involved in their children’s lives on a consistent basis, the technicalities do not matter. Children will look forward to seeing the partial custodian during weekends and dinner visits and other periods of custody, just as much as they look forward to spending time with the primary custodian. Cherish whatever time you have with your children, because your children cherish it as well.

2. Think About What You Say Before You Say It.

Children benefit from having a relationship with both parents, and turning your children against the other parent may make you feel better, but it will harm them in the short and long term. Furthermore, your children might resent you when they grow up and realize what you have done. Keep adult conflicts between adults where they belong.

3. Children Are Not Your Messengers.

Communicating through your children may be easier than communicating with the other parent directly, but avoid taking this approach. Doing this places your children in the middle, especially if the messages are less than cordial. For instance, it is not your child’s place to tell father/mother that more clothes are needed for the weekend, or that child support is due on the first of the month, or that boyfriend/girlfriend is not an appropriate supervisor. If you cannot speak with the other parent directly, then try text messages, email or another form of communication. Regardless of the method you choose, children should not be involved.

4. Children Are Not Bargaining Chips.

Making the custody arrangement you would agree to contingent upon what you get in terms of child support, property settlement, etc. is not in your children’s best interests. If you truly believe that it would be in your children’s best interests to be in the custody of the other parent 50% of the time, then that is what needs to occur. There are numerous acceptable tactics available when negotiating a proper child support amount or equitable distribution settlement, but threatening to withhold the children or allow for minimal time with the children is not one of them. Your children are not commodities to be traded, and it is important to remember that in the heat of the moment. Additionally, remember that you must act as your child’s advocate, because they do not really have a voice in the custody proceeding until they are almost too old to be involved in a custody proceeding. Think about what they would say if they could, and voice that opinion for them.

5. Do Not Let Children Take Advantage of the Divided Household.

When your children are complaining that the other parent disciplines too much or does not let them eat too much sugar or acts like a parent in some other fashion, do not offer them a way out when they are in your custody. Children of intact households get the benefits of their parents acting like a team – stability and consistency. As much as possible, try to reinforce the good habits the other parent is trying to instill in your children as opposed to trying to be the “fun” or “cool” parent.

A lot of the above may seem like common sense, but it can be easy to forget. Just remember that the way in which you handle custody matters impacts children forever, and then forgetting is no longer an option.